In fact, 'Spring into Song' was the intended first concert of our 10th Anniversary Year, so what else could we possibly return to?  We did make some amendments to the original programme though in the light of world events and we had peace in Ukraine in our minds. 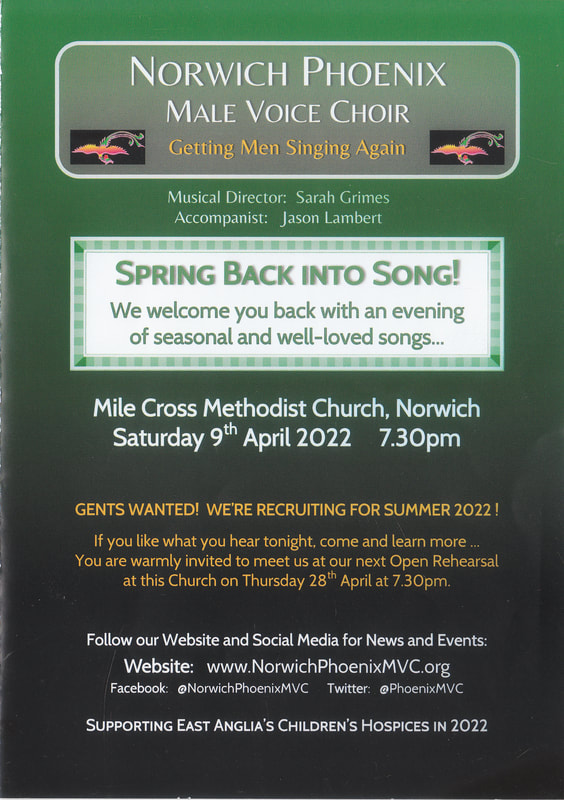 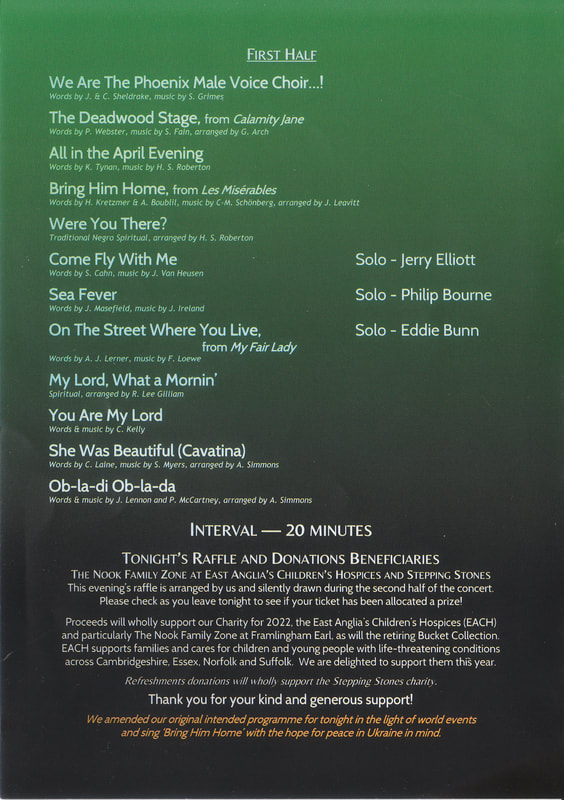 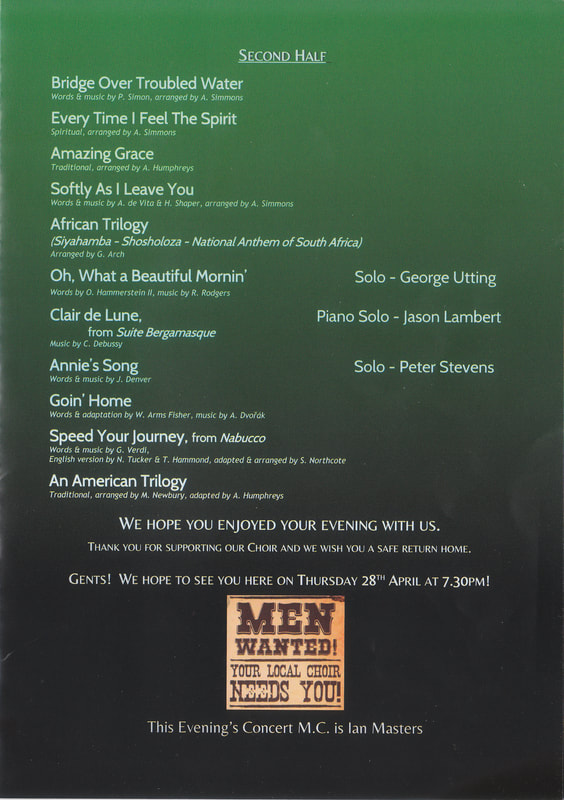 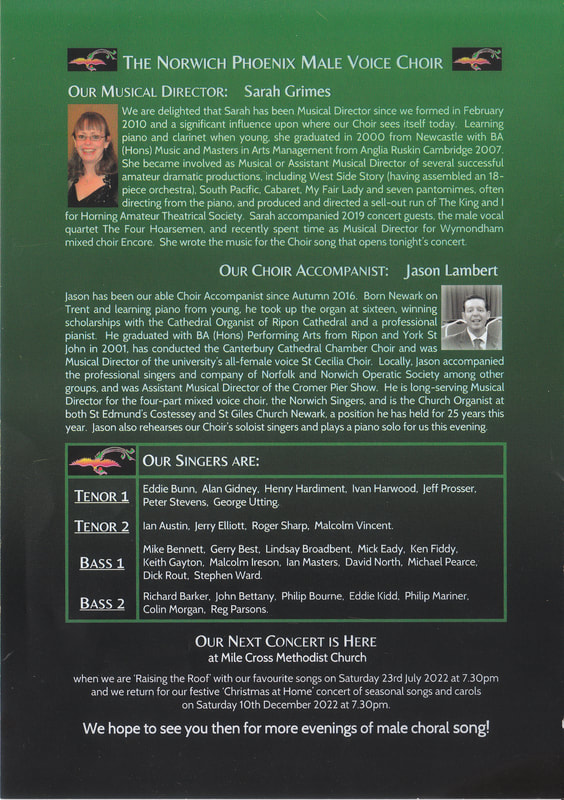 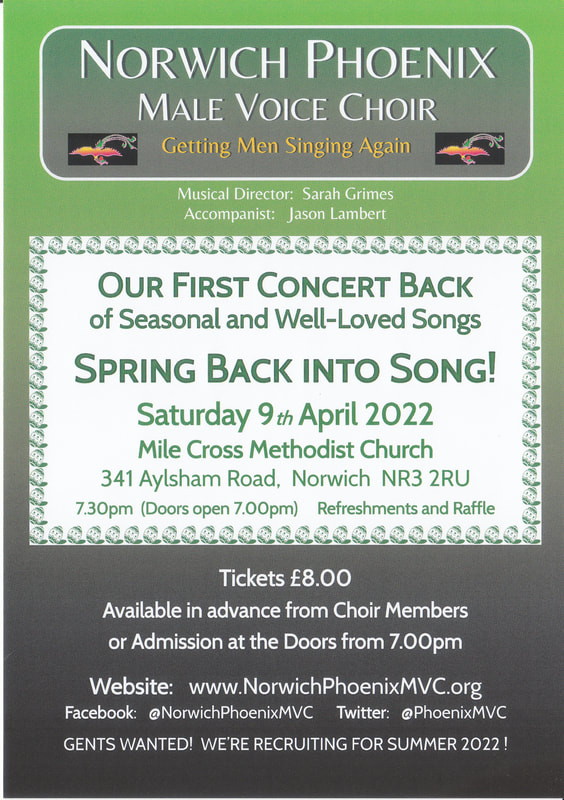 It might not have been exactly how we planned it, but hands would have been bitten off for this performance quality!
It could have been our full complement.
In fact, only 17 of our Singing Men took the stage at the appointed time,
the remainder having succumbed to several longer-term issues or a positive Covid-19 test...
...yes, the viral scourge of our days is neither gone, nor forgotten
- particularly by those staring at the dreaded red line of an LFT in the days prior to the Concert...

It was also a sound learning curve for those on our newly-elected Committee with developed responsibilities!
Our Treasurer Ian was seeing 'Front of House' first hand and may have been having a 'singing season off' in the Spring,
but he certainly didn't get a 'night off' by staffing the Raffle Sales Desk...!!!
But he is at the front of the queue along with new Chairman Jerry Elliott
to warmly thank his own wife Lynn and Jerry's daughter Rosie
for getting our 80+ concert-goers into the Church without a queue and all advance ticket-holders suitably fast-tracked.

With everyone in, we had another World Premiere on our hands...   ...and this one, we were also the subject of!
The Choir's new theme is a family affair since our own MD Sarah wrote the music to her own parents' words.
Of course, now it has attracted spontaneous clapping along and cheering from our audience,
I suppose we'll have to open up with it every time now...
...well, thanks folks...   ...just remember it was your idea...   ;)
Indeed, Sarah was notably on good form throughout the evening to harness the Choir's sound
and make it feel that so much was produced by so many,
but it was actually sung by so few!

Albeit adjusted in the days prior to the Concert because of developing events in Ukraine
which led to the removal of some planned items in favour of others,
several programme items continued to feature spirituals and hymns with Lent as a theme,
and caught the moment well, especially 'All in the April Evening' with its haunting melodies.
The heartfelt 'Bring Him Home' was the programme item delivered by the dulcet tones of our 17
with peace in Ukraine particularly in mind.

And then into the First Half solos...   ...sadly, Choir Librarian Philip Bourne could not attend tonight,
but otherwise what treats were served by Jerry Elliott and solo newcomer Eddie Bunn!
Jerry's current penchant for a jazz lilt served well as Sinatra's famous 'Come Fly With Me' rang out
and Eddie worthily joined our ranks of Phoenix Soloists with 'On the Street Where You Live' from My Fair Lady.
Songs later in the half included 'Cavatina' - the theme from the film, The Deer Hunter -
and the half closed with clapping along to Lennon and McCartney's 'Ob-La-Di Ob-La-Da'.

Following Simon and Garfunkel's 'Bridge Over Troubled Water', it was a second half of trilogies...
...new to us was the African Trilogy and several kindly remarked that we did indeed transport them to South Africa,
so we will be doing that one again no doubt some time in the future...!
...and yes, you couldn't make out the solo voice unless you realised that it was our own Sarah!
Again, our soloists sparkled with George Utting singing 'Oh, What a Beautiful Mornin'
as only he can, and Peter Stevens confirming his reputation among our soloists with John Denver's 'Annie's Song'.

In between, we turned specifically to the Church's grand piano.
Our Choir Accompanist Jason Lambert is getting a habit of producing something special for Phoenix audiences.
Tonight was one of those nights with a rendition of Debussy's 'Clair de Lune'
that one concert-goer described as being played '...with skill and sensitivity'.

The other trilogy of the evening, namely An American Trilogy, closed the published programme
and 'Glory, Glory, Hallelujah!' was indeed sung when MC Ian Masters announced that we had time for one more.
It could only have been Gwahoddiad...

Two other matters of note added to the success of the evening:

Firstly, it was one of three concert opportunities in 2022 to raise money for a named charity agreed by our Choir Members
and our Charity of the Year 2022 is East Anglia's Children's Hospices, known as EACH,
and particularly The Nook Family Zone that EACH provides in Norfolk's Framlingham Earl.
You may know that our 'silent' raffles cost very little to run since they are arranged by the Choir's Members,
so we know that donation of concert raffle proceeds over the year will raise a tidy sum
thanks to the generosity of our Audience and Members in buying tickets.
We are also holding retiring collections after every concert this year
and we know that EACH will benefit from the huge generosity of our concert-goers.
A presentation will be made to representatives of East Anglia's Children's Hospices during our December Concert.

Secondly, several male attendees at the concert expressed an interest in what we did as a Choir
and that they were interested in attending our late-April Open Rehearsal.
Well, they will be very welcome...!
...and we hope to be able to announce their arrival as our latest members at our July Concert!