Home again, naturally, as prior arrangements were changed! 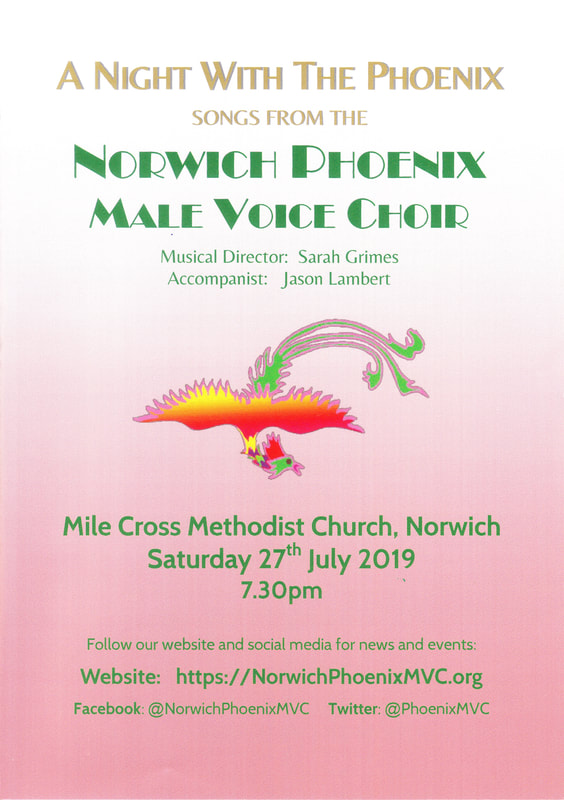 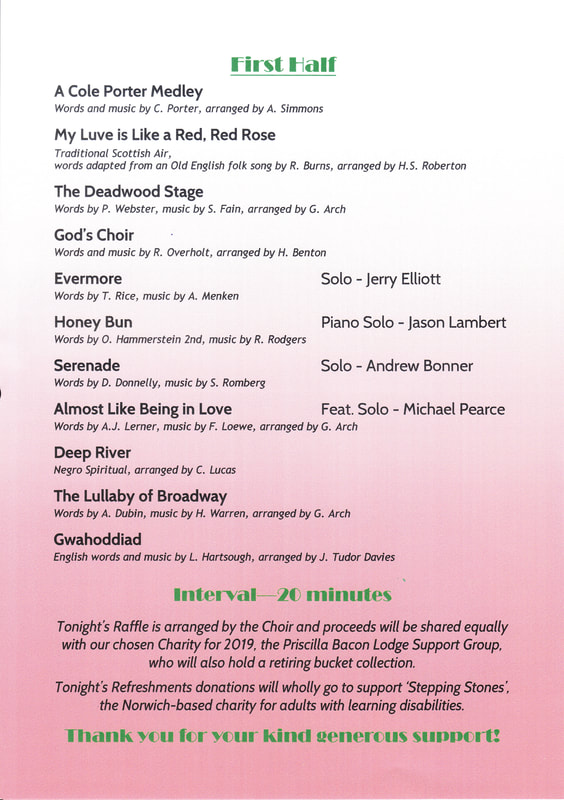 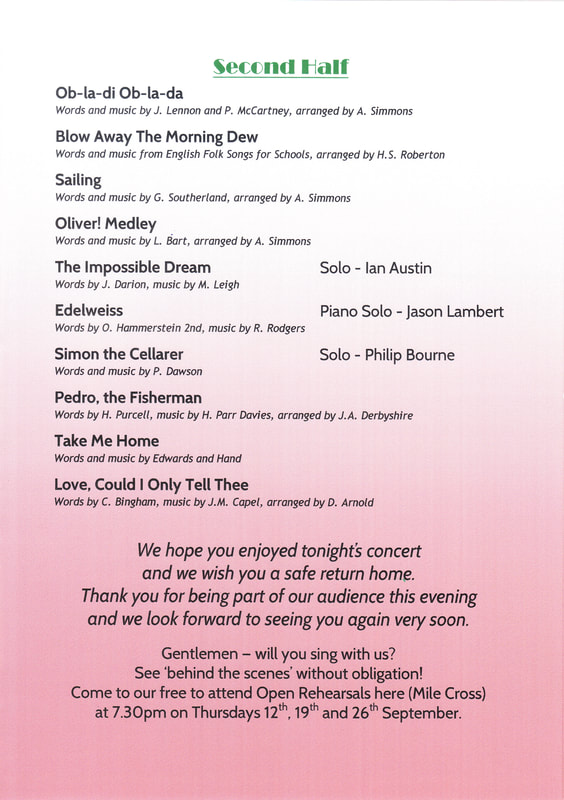 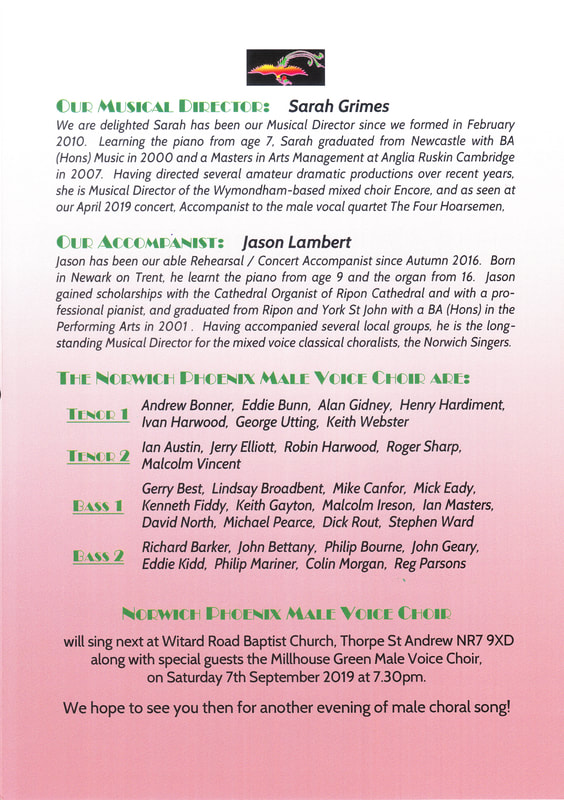 It was like we were going to be on our hols...!   A summer away from our Mile Cross Methodist Church 'home base'...   ...but no!!!   Plans to sing in Thompson on 27th July fell though,  and it was an easy decision when deciding on a replacement venue
to say "Home Again?".    Naturally!   (Do we know a song about that?)  And it was a good job jobbed too!

Starting with the 2019 opener based upon a medley of Cole Porter songs, the Choir was well received by a lively audience
and, in return, gave a good account as it progressed through the 'A Night with The Phoenix' programme
which featured several better-known male voice choral standards and showsongs.
The half ended with the thundering rendition which Phoenix is known for of Gwahoddiad.

Disappointment in the first half that Andrew Bonner was not able to attend and treat us to the advertised 'Serenade'
was made up for in part by the gem from Beauty and the Beast that Jerry Elliott delivered which,
amazingly, had not featured in the original film, but had been added into the later remake.
With Ian's The Impossible Dream not proving impossible at all,
the rich bass tones of Philip Bourne's Simon the Cellarer,
whose own quest to avoid the noted stocktaking in its literal sense, whilst also avoiding looking for love,
jollied the audience along.
A brace from Accompanist Jason Lambert's piano featured also,
with a first from the keyboard in the second half...  ...audience participation!
Not to assist with playing, or even with turning over the pages of music (definitely Suzanne's role!),
but by joining in with a verse and chorus of Edelweiss.  The audience responded admirably!

It is important as ever for us to show that new material is regularly added to repertoire
as well as audience favourites having the dust blown off them and given an outing from time-to-time
and the Choir pieces in the second half illustrated this well.
Whilst Pedro the Fisherman is a bit of fun and may be new to Phoenix, it is not to the male voice song directory,
but Take Me Home was new to everybody and was as well-received in concert
as it was behind the scenes when being rehearsed.
Another 'near' standard for Phoenix, Love Could I Only Tell Thee, completed the published second half set.

Again, the evening's audience showed its great generosity in respect of both of the worthy causes available,
local charity Stepping Stones benefitting from donations for the interval refreshments
and the Choir's 2019 Charity of the Year,  the Priscilla Bacon Support Group,
would benefit from the retiring bucket collection with a raffle proceeds share.

A reminder for our December Christmas audience at Mile Cross that a special presentation
will be made to the Group's representatives at our concert.
The Group supports the work of the Priscilla Bacon Lodge Hospice by providing items
and other support for the hospice, its patients and their families.

A good outing for Phoenix, then, although not where it was originally intended!
The Choir will need that concert energy for its next outing though...
...hosting the Steelmen from Sheffield's Millhouse Green in early September! 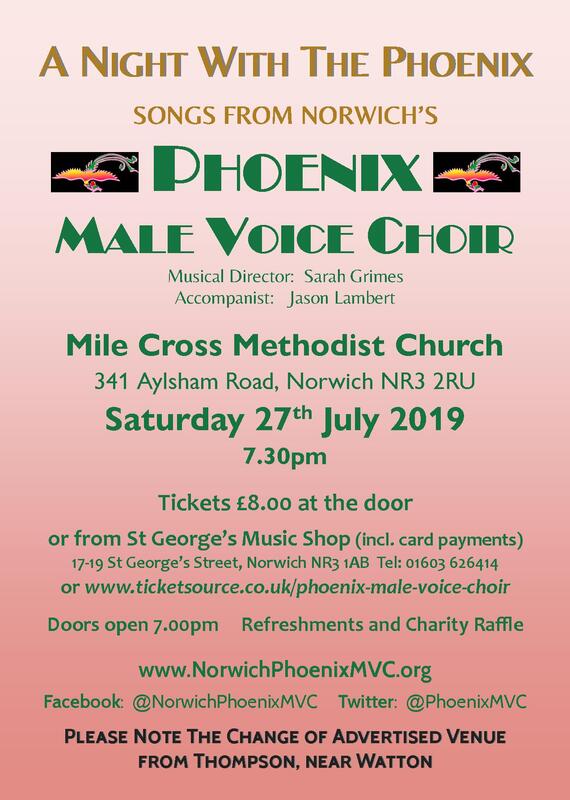 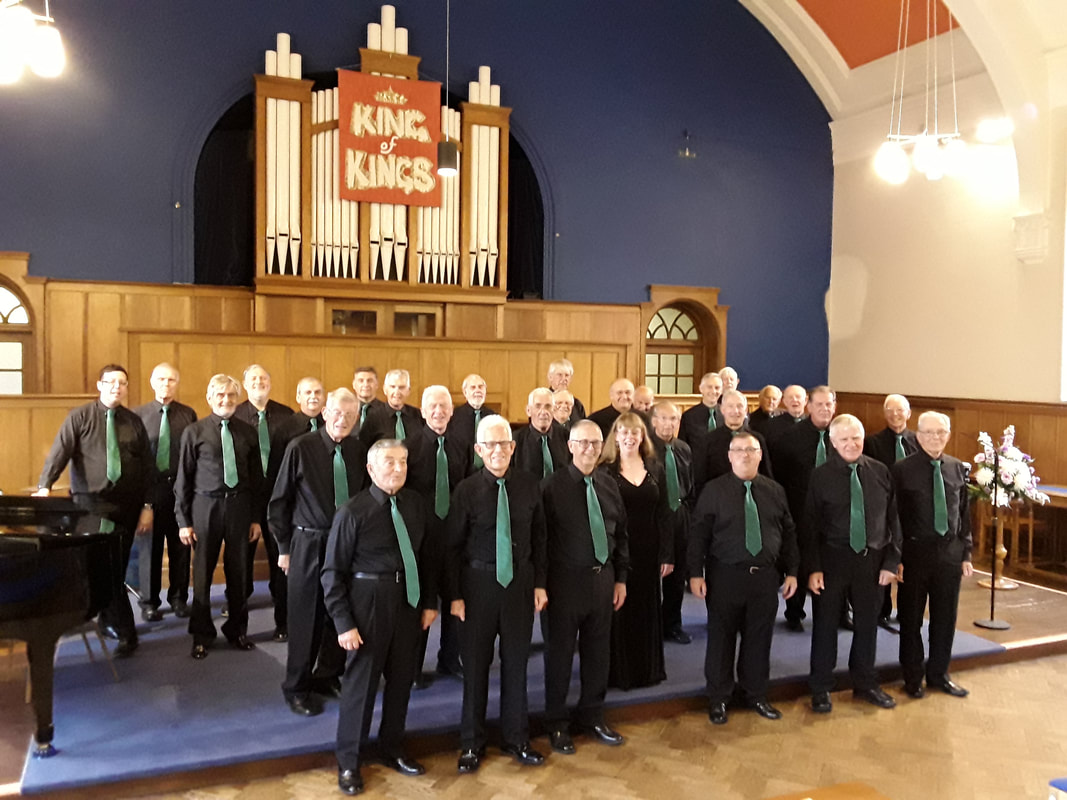