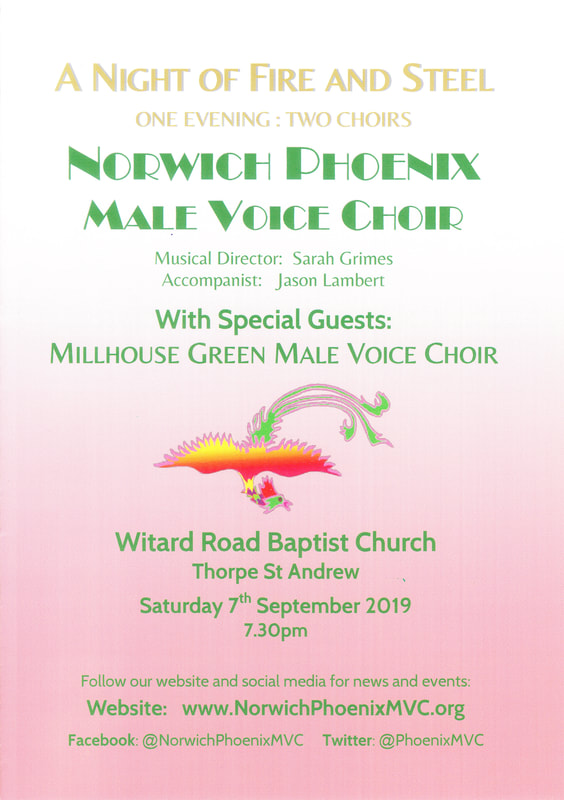 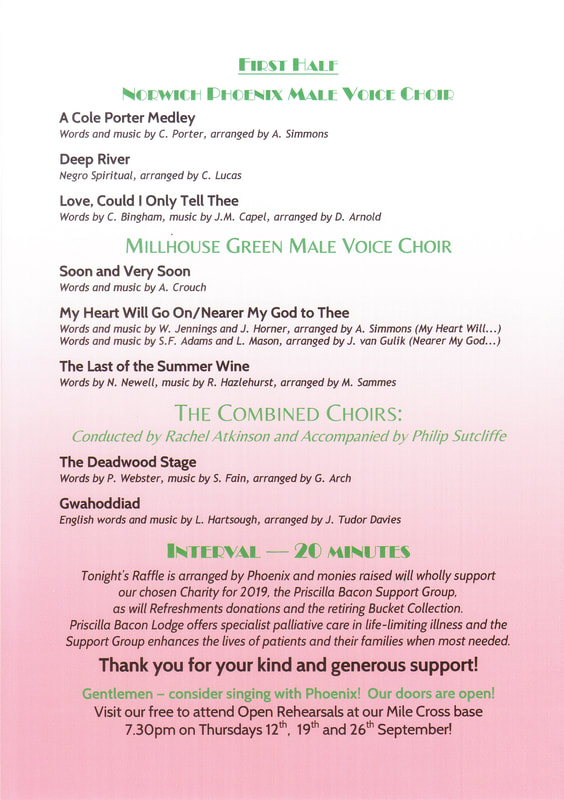 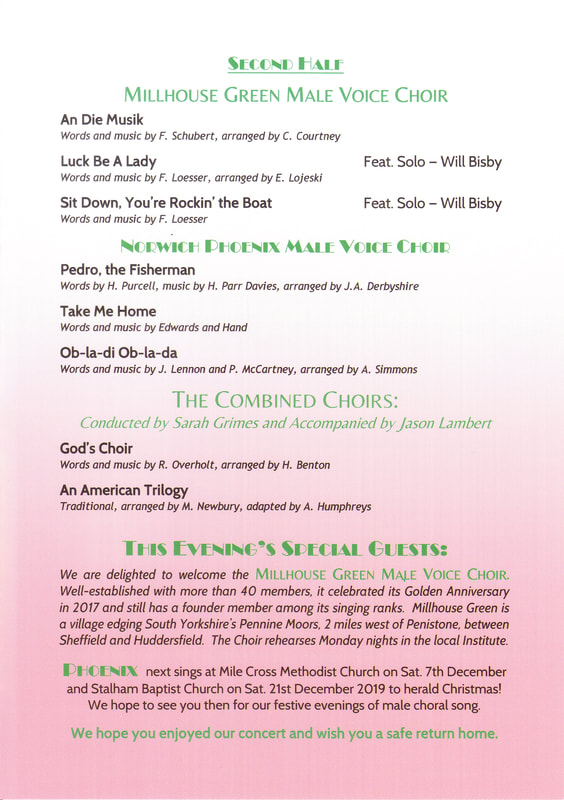 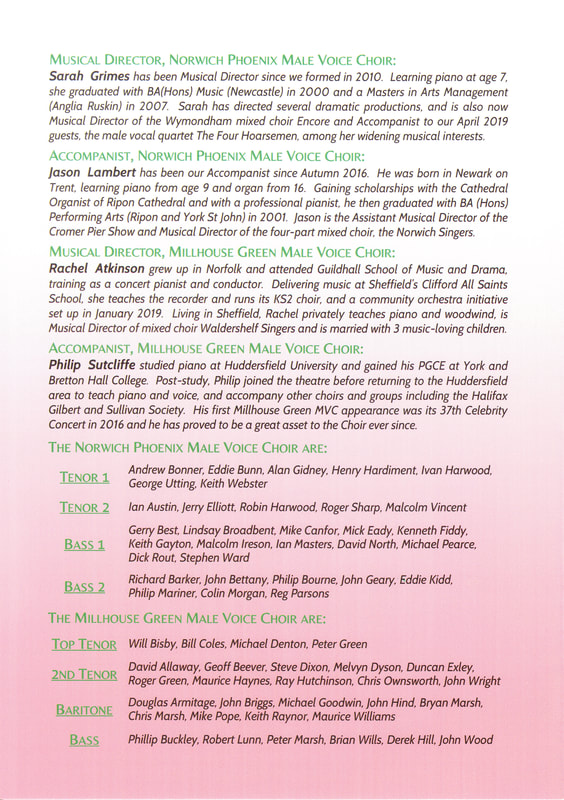 More 'firsts' in the life of Phoenix occured in early September when we visited Thorpe St Andrew's Witard Road Baptist Church
to host our first Autumn concert appearance for some years.

Arranged to celebrate the visit to the County of guests and stage-sharers, the Millhouse Green Male Voice Choir,
our lively audience was treated to two exceptional sets from each of the male songster groups
and to two song doubles of male voice standards from the combined choir of 60 voices for each 'end of half' feature.
In return, the entire audience took to its feet as one in final applause recognising the endeavours of both groups of singing men.

There had been several signs recently that individual audience members were recognising
Phoenix's increasing performance quality in upstanding applause, but for the first time, it had now been party to a concert
where the whole body of those present had arisen in a standing and prolonged ovation.
In fact both choirs - the 'fire' from the Phoenix from the flames and the 'steel' from the near-Sheffield singers -
had been buoyed up on a very warm evening by the audience's enthusiasm throughout,
and with everyone assembled in the auditorium of the Church's worship centre from the start of the concert
(both sets of choir singers' own respective family and friends, including a very welcome group from our visitors,
our own returning and new audience friends, and both sets of performing choristers),
there was more than a healthy buzz from the full house present all during the evening.

After opening the show with its now familiar for 2019 Medley of Cole Porter songs, the aspirational spiritual Deep River
and its near-anthem Love, Could I Only Tell Thee, the men in black and green swapped places with our South Yorkshire guests
who would remain on-stage for the rest of the half.

It's always good to hear pieces that Phoenix had not already tackled during its nine years,
and Millhouse Green ticked that box several times in both of their sets, drawing great admiration in their performance.
Soon and Very Soon had given way in an earlier democratic vote to an all-male choral version of The Prayer,
an individual offering as a duet from two Phoenix Members some years ago.
The swap was well conceived in execution and one haunting rendition was followed by another,
namely a couplet connected by the Titanic disaster.
My Heart Will Go On, the theme from the Oscar winning film, was medleyed with Nearer My God To Thee,
said by the ship's survivors to have been the last piece from members of the orchestra as they bravely awaited their fate.
The television theme from The Last Of The Summer Wine took on greater significance as a local tribute and anthem
because of the visitor's home location close to where was set and remain our memories
of Foggy, Compo, Nora Batty and the others, over the course of several series of adventures.

The rousing Deadwood Stage (Yee! Ha!) and uplifting Gwahoddiad, beloved by both choirs, closed the half
under the direction and accompaniment of the Millhouse Green team of Rachel Atkinson and Philip Sutcliffe respectively.

The second half opening set showed the dexterity of our visitors when they followed An Die Musik in Schubert's native tongue
with Luck Be A Lady and Sit Down You're Rockin' The Boat, each featuring solos from the very able Will Bisby.

Their shirt-sleeved uniform (too warm for their blazers) in turn swapped back to our Nelson's County songsters
recounting the story of Pedro the Fisherman's tale of love in a Lisbon fishing harbour,
and the melodic Take Me Home captured the attention of both audience and guests,
many of whom had not previously heard the piece.
The audience favourite Ob-la-di Ob-la-da completed the Phoenix set,
who were then gladly joined by the men of Millhouse Green
and the combined voices closed the show with God's Choir and the roof-raising American Trilogy.
Our own Sarah Grimes and Jason Lambert with the direction and accompaniment honours this time.

Once the applause had subsided, both Choirs' respective Chairmen,
Keith Raynor for our visitors and our own Ian Masters, gave a formal end to the evening's proceedings,
remarking upon the coincidence that both all-male choirs
were under the musical direction of women from within our own Norfolk county boundaries,
and recognising that both ladies had also respectively skilfully compered their earlier responsibilities
by the presentation of floral bouquets.

In fact, it was a bit of a long weekend all round even before the concert!
Our visitors had given a well-received recital in Norwich's Anglican Cathedral on the previous Thursday afternoon,
and on Friday evening, 'Guests' became Hosts when they produced a variety show
from among their own number within their party and attending Members of Phoenix
were invited to take part on both occasions.

It wasn't just the audience who were the winners on concert night though, we can confirm.
Phoenix's 2019 Charity of the Year, the Priscilla Bacon Support Group,
received very strong support from the refreshments donations, retiring bucket collection and donation of raffle proceeds,
these funds being generously raised from (and a huge 'thank you' to) both choirs and their respective concert-goers
and we are looking forward to making a sizeable financial presentation at our 'home' Christmas Concert at Mile Cross
in early December to the representatives of our supported charity this year.

Speaking of buckets, we have added to the bucket list of our own
in accepting the warm invitation from our visitors to visit them in South Yorkshire at some point for a night of song there.
Now, where did I put the passport when we got back from Grantham...? 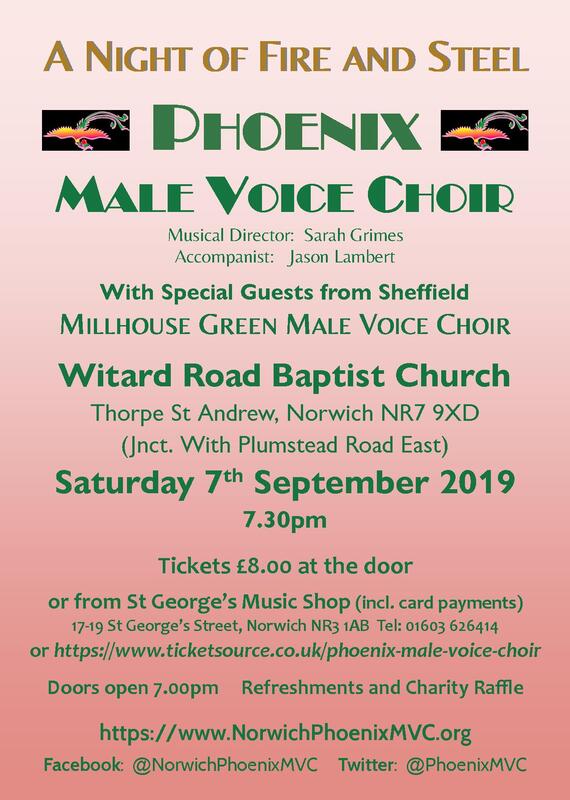