In a very Christmassy-feeling evening,
Phoenix are on form again to close 2019 in glorious festive style! 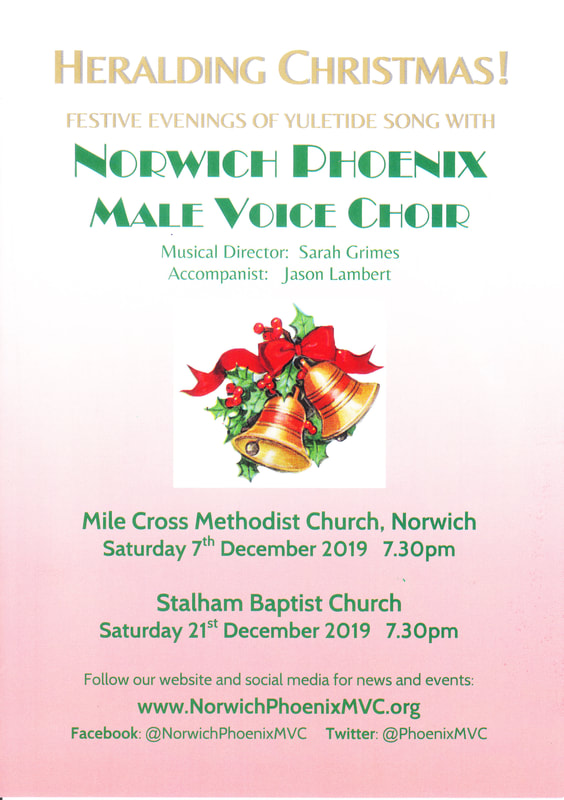 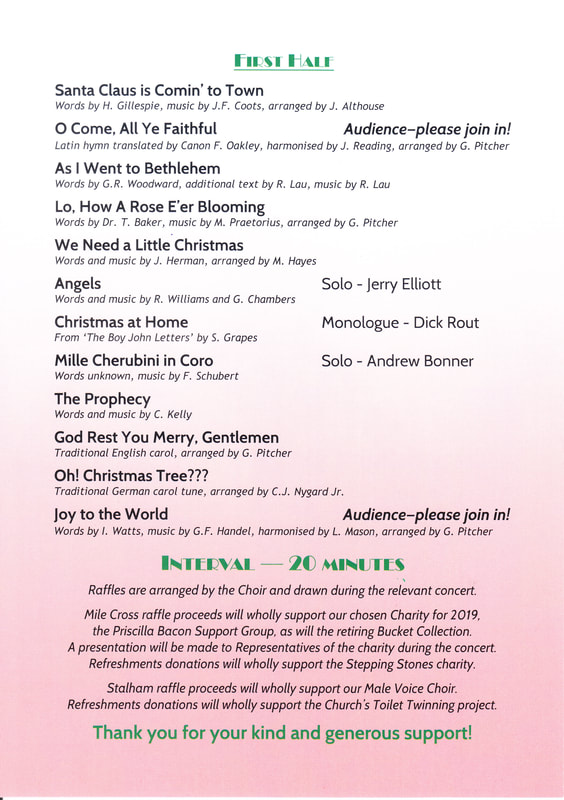 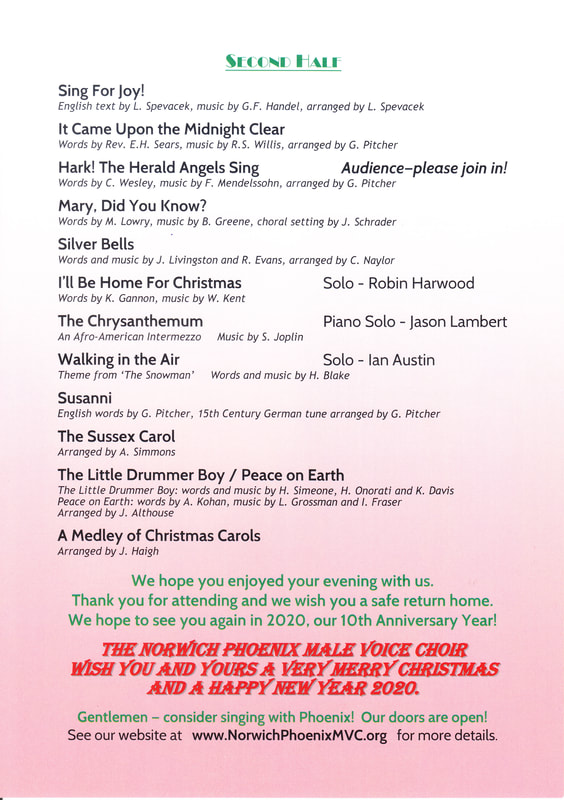 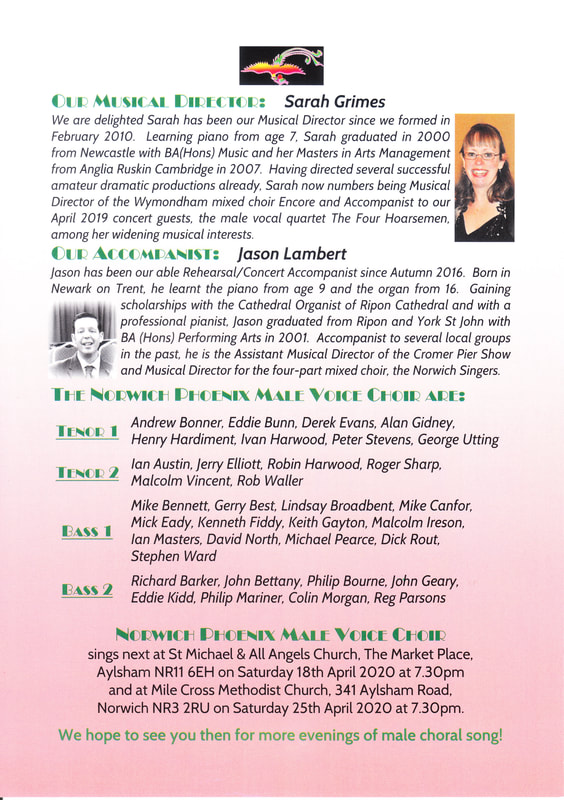 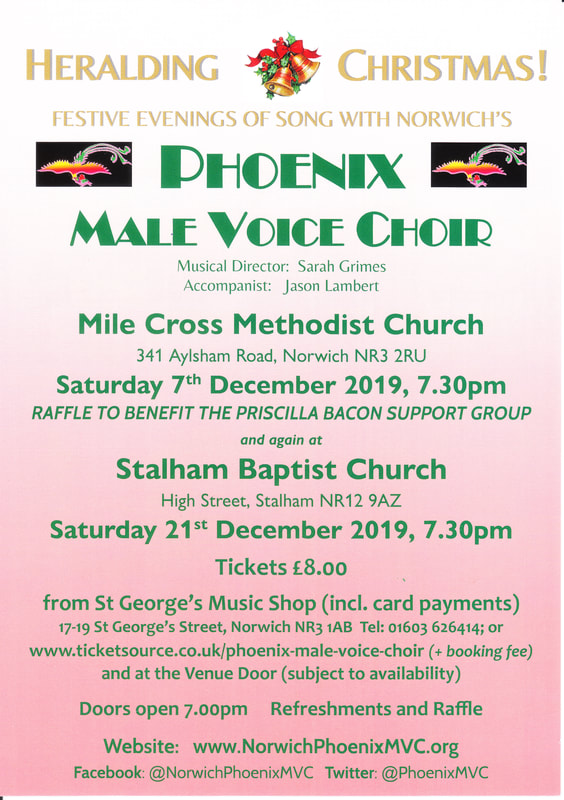 It felt VERY Christmassy!!!
That's not a surprise though in that Christmas itself was just 4 days away when our Singing Men
ventured out of the City to the Broads and Stalham to Herald Christmas in the town's Baptist Church.

The scene was already set - this wonderfully friendly Church had already done an enormous amount
of publicity for us before the evening and had printed a splendid article in the Christmas 2020 edition
of their exceptional '3 issues per year' magazine, 'Community Scene', delivered to many of the town's homes.
Also, the Church itself was already bedecked in Christmas finery ready for the week's joyous services;
a fine complement to the festive feel of the evening!

It was Phoenix's first real 'full performance' this close to the festive big day.
After nine years, the Choir now had a first opportunity to offer its Christmas programme to a second audience,
having already delivered its annual Christmas Concert at its Mile Cross Norwich home base,
but any fear there might have been that repetition would lead to anticlimax was entirely misplaced.
Indeed, the folk of the Baptist Church were so welcoming
that it would have been hard not to enjoy the evening and no artificial encouragement to do so was required.

It was also a special evening for our Musical Director Sarah in that much of her musically formative years
were spent in study in this building and to mark the occasion, resident M.C. Ian Masters took a night off
(he was still present in our Bass 1s though!) and Sarah expertly guested as M.C. for the evening.

With the Choir's programme of songs unchanged from Mile Cross a fortnight previously,
there was something comfortable about each piece, seamlessly sewn together by Sarah's narrative
and our second choir - namely, the evening's audience - added their voices with gusto when their participation was requested.

We soon became the only Choir to have performed Christine Kelly's 'The Prophecy' twice...
...although we are also the only choir to have performed it at all, having previously premiered it in our Norwich performance!
The feature soloists of Jerry Elliott, Robin Harwood and Mike Pearce again narrated in song
various aspects of the understood background to the Wise Men's visit in the Nativity events
and the Choir intoned that the prophecy of the Holy Birth had indeed come true.
Again, post-concert comments contained much praise for the song, and the composer has been advised accordingly!
We can no doubt expect a rummaging in Christine Kelly's catalogue for future concert pieces...

Following the first set solos, the half ended in 'Joy To The World', complete with audience participation.
In a very personal moment of commentary in introduction to the piece,
M.D./M.C. Sarah recounted the help and guidance that her Music Tutor Liz Autrin
had given her in her own music studies at the Church.
Indeed, said Sarah, her music career would not be where it is now without Liz's valuable support.
Sarah satisfyingly recounted that Liz had indeed had the opportunity to listen to Phoenix Male Voice Choir
in our previous concert visit to Stalham before she sadly passed away
and that this pre-interval piece was dedicated to her memory.

If anything, the second half could not have been any smoother, with Choir, Soloists and Audience all in fine form.
Again, the Medley of Christmas Carols, culminating in its rendition of 'The 12 Days of Christmas'
and a rousing chorus of 'We Wish You A Merry Christmas' closed the published show.

A further song was implored by our audience friends and Phoenix completed the evening
and, indeed, their 2019 concert schedule, in fine festive style with a non-programme final item!
'Best Yet' is an often over-used epitaph, but 'up there with the best' is a perfect description of the evening.


Following the drafting of our Christmas Concert Programmes in which our singing membership was named,
news reached us that Tenor 1 Derek Evans, who had only joined us in September 2019, had sadly passed away.
Derek had not enjoyed good health in recent times, but he brought with him a rich history in singing and performance,
appearing in Ralph Reader's Gang Shows and going on to produce similar shows in Essex.
He was with us so briefly, but is missed by us nonetheless on our rehearsal room front row.
The Phoenix Male Voice Choir is honoured to have been mentioned in his Order of Service.
Our thoughts are with his family and friends at their sad time. 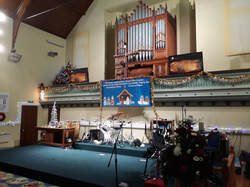 Above:   A very welcoming Stalham Baptist Church, suitably decorated for the Christmas Season, awaits the Choir's entrance.
Below Left:   Tenor 2 Robin singing 'I'll Be Home For Christmas'.
Below Right:   In true Norfolk Dialect, Dick reads one of the 'Boy John Letters' from Sidney Grapes, published by local paper, the EDP. 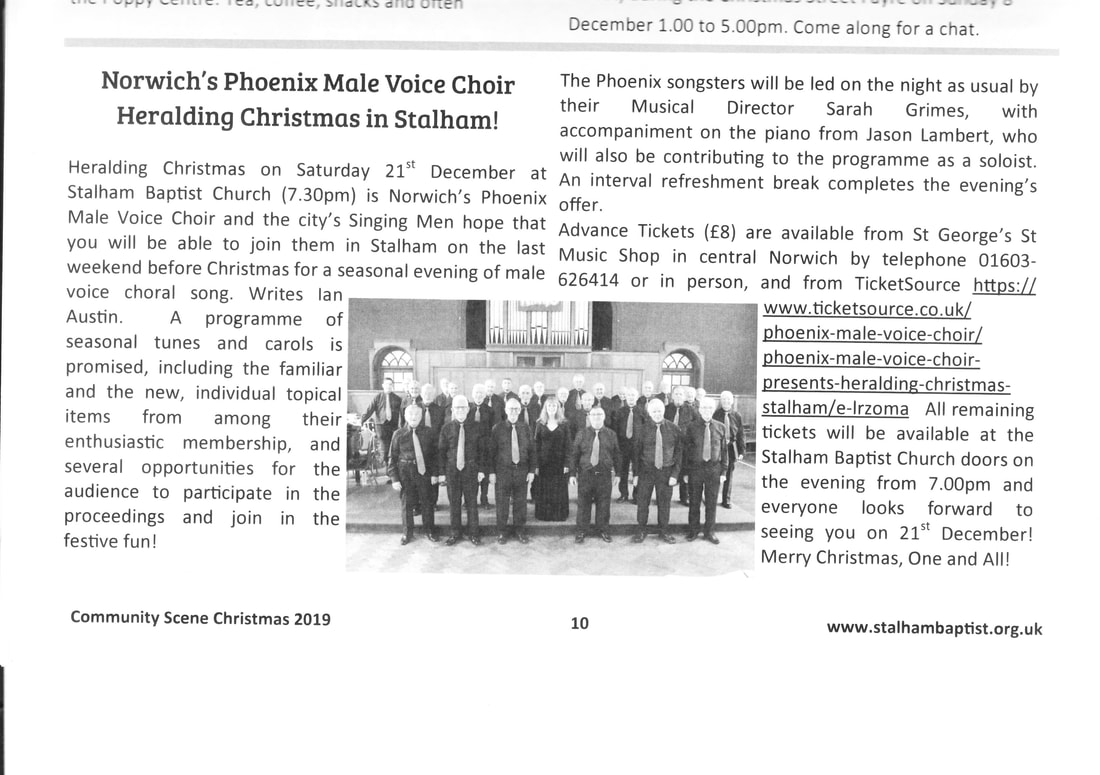